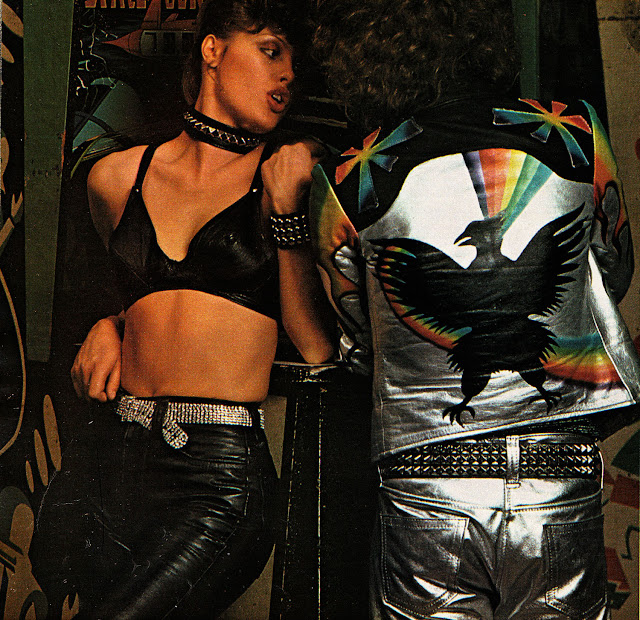 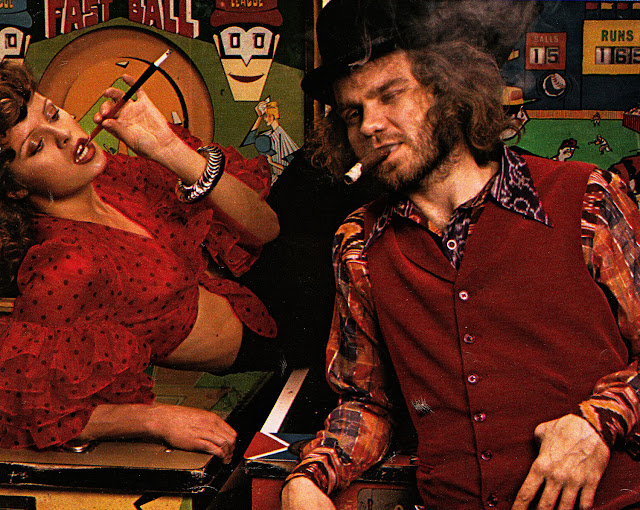 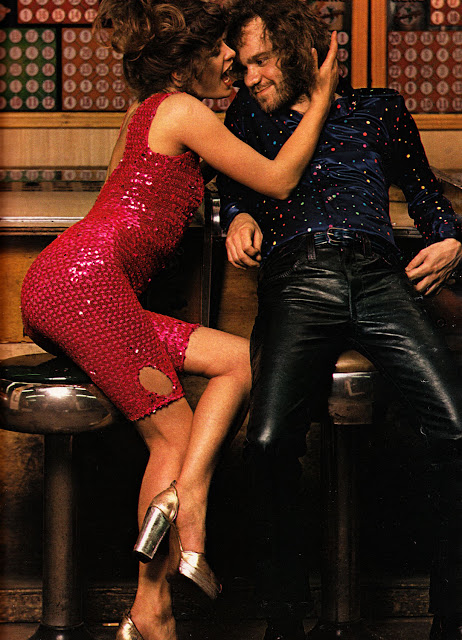 Posted by Featherstone Vintage at 08:51 No comments:

"WHATEVER SHE SELECTS HAS TASTE..." 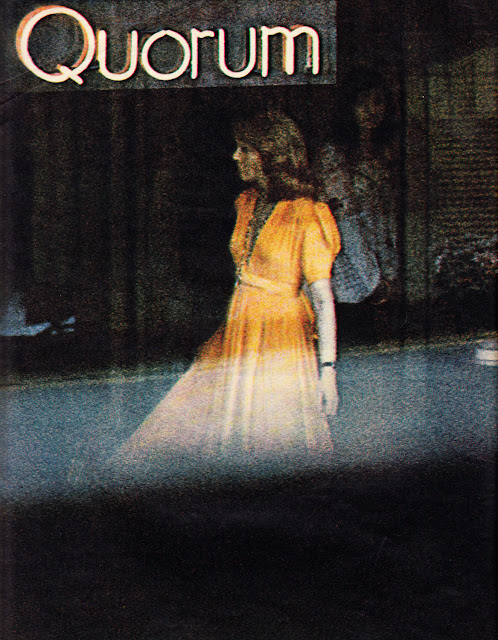 Quorum Storefront
Louis Rothmans Select, Everything a select cigarette should be.

Posted by Featherstone Vintage at 08:52 No comments:

THE AGE OF AWAKENING 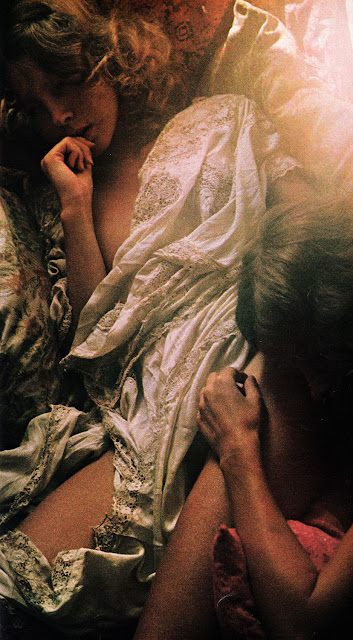 Caught in half sleep or in rapt self-contemplation while disrobing for a bath, the youthful beauties of David Hamilton's portraits are perfectly poised.  Hamilton, whose camera seems an invisible presence, regards the placid composure of his models as central to his photographic art. 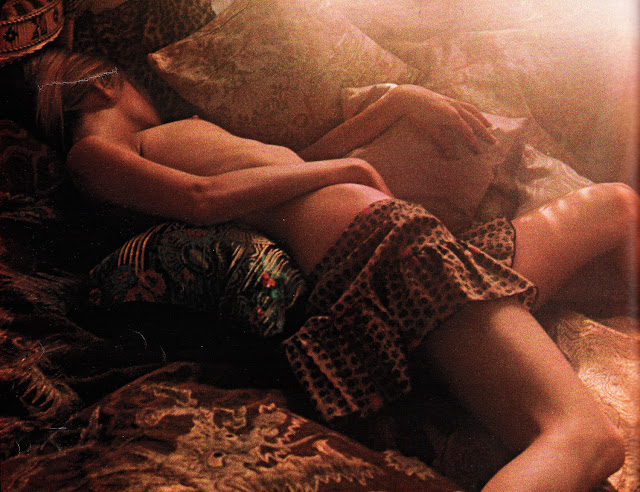 Hamilton's photos are illuminated not only by the golden glow of sun streams but also by the bloom of his slender young models, who seem to delight in the ripening of their lithe figures even in the innocent repose of sleep. 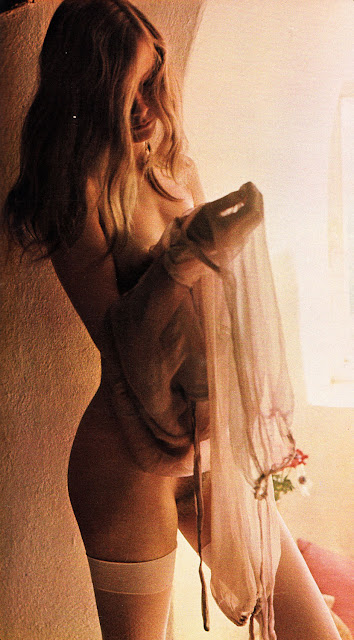 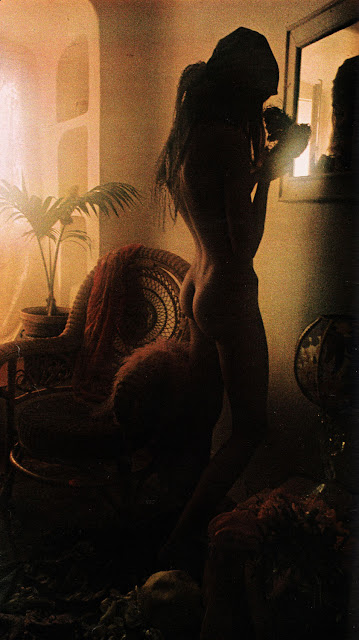 Simplicity, soft light and perfect composition---as in studies of a pensive girl before a mirror or amid the disarray of castoff clothes---are, in Hamilton's words, "the whole thing," the special elements that make his portraits unique. 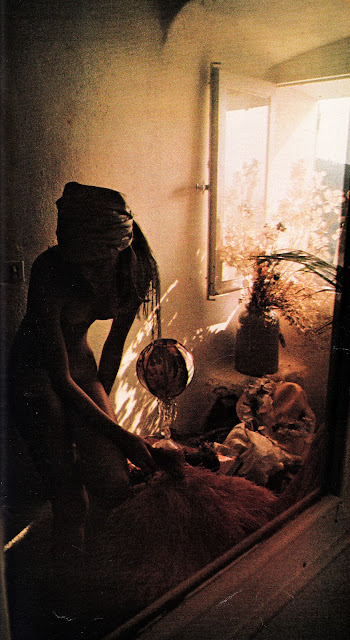 Hamilton usually shoots his sensitive tableaux in southern France, but he often journeys to Sweden in search of models "because Scandinavian girls are uncomplicated and very natural; they don't have complexes and their bodies." 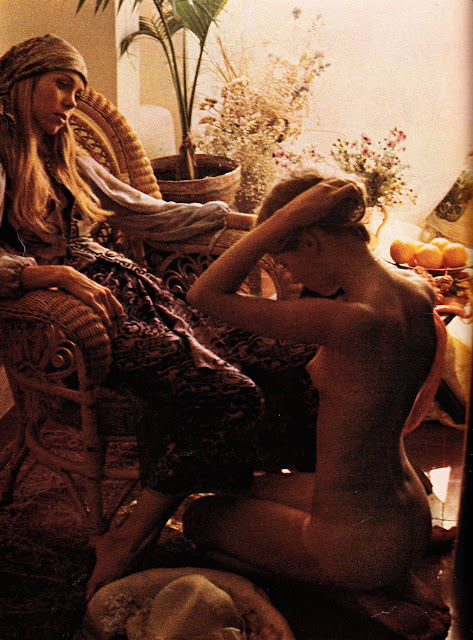 "For me, it is necessary that beauty be very soft," Hamilton says of the lambent lighting in his subtle pictures.  "Fortunately," he adds, "there is enough undiscovered beauty throughout the world for me to keep going forever." 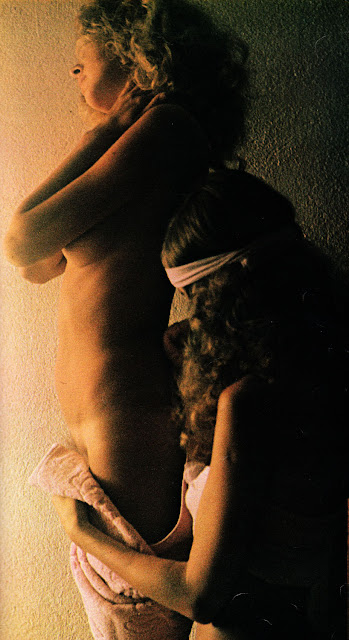 In his early work, Hamilton shot mainly landscapes and flowers.  Only in the past two years has he devoted himself to photographing women.  Understandably, he plans to concentrate on the female form almost exclusively in the future.

Posted by Featherstone Vintage at 15:23 No comments: 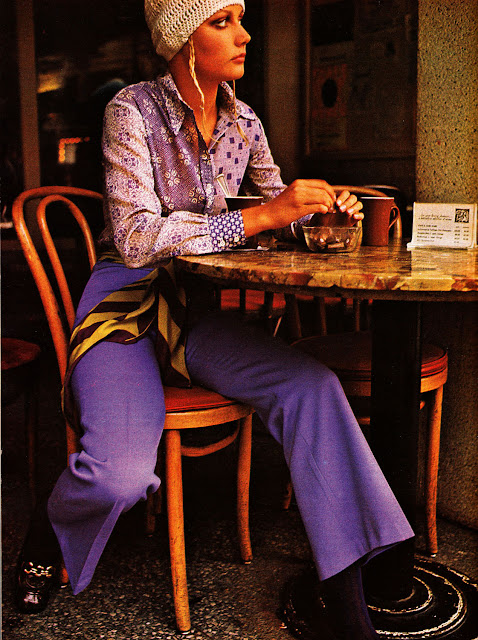 "The days of Best and Going-to-Work Clothes have faded, and cool and calculated co-ordinates have taken their place.  This summer moody mauves hog the limelight in slim tailored voile and cotton shirts and tunics, French-cut trousers and cleverly seamed skirts.  So get together all that's separate and wear your "best" everyday of the week." 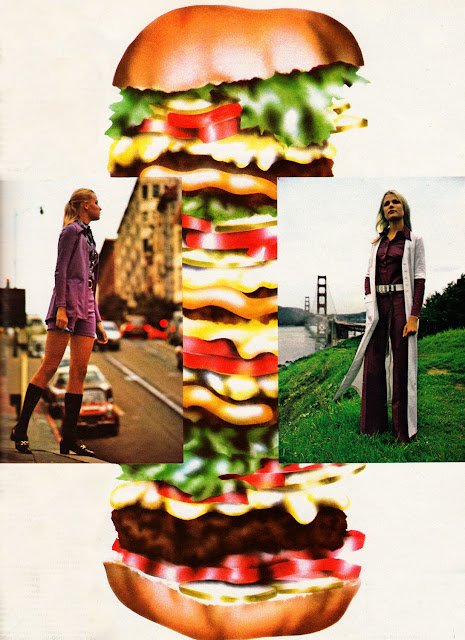 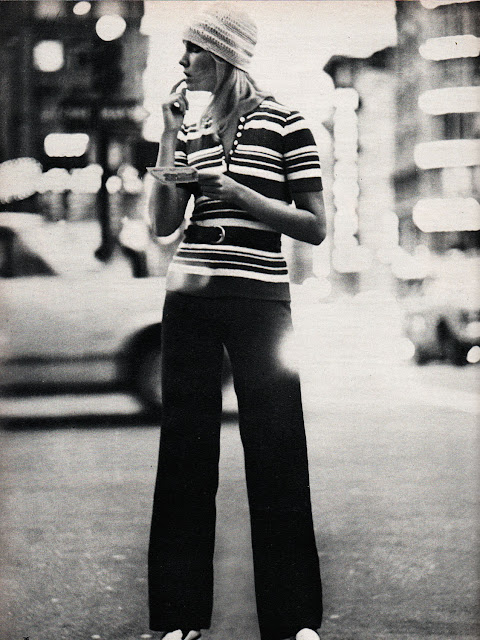 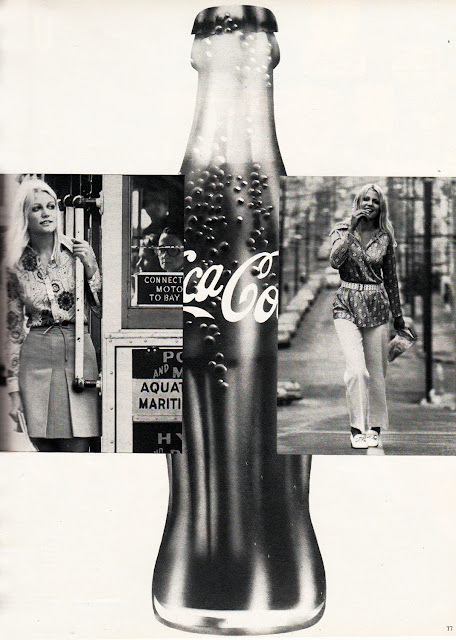 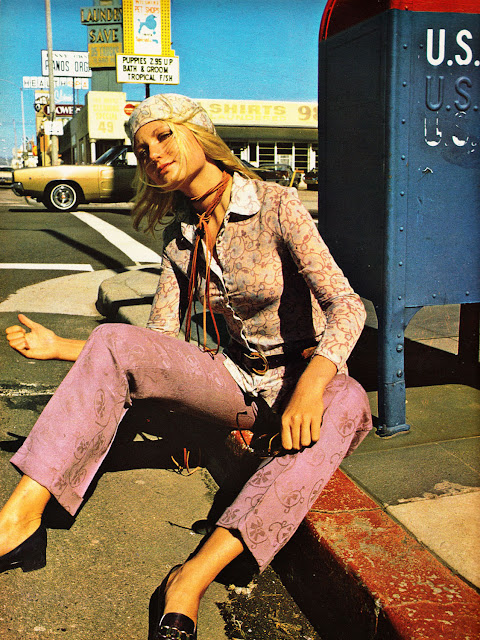 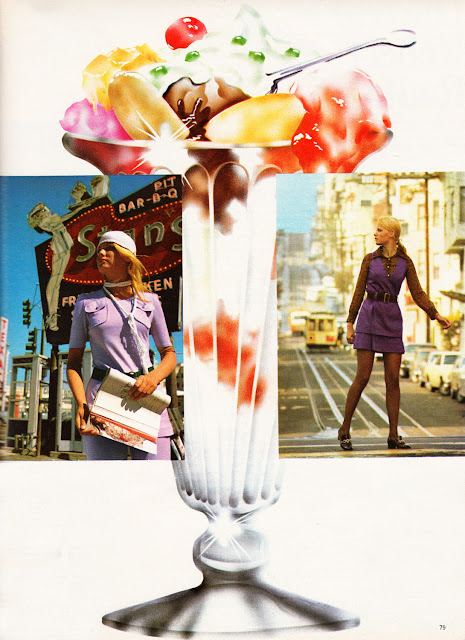 Posted by Featherstone Vintage at 08:05 No comments: 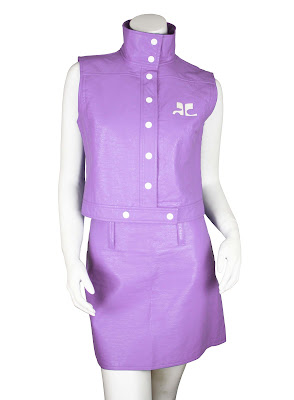 Posted by Featherstone Vintage at 09:07 No comments:

GREAT (IF YOU CAN BARE IT) 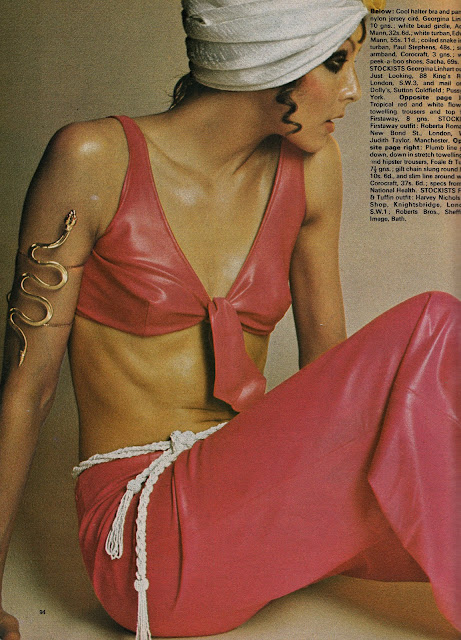 "Yummy, yummy yummy, there's some sun on my tummy! For Honeys who have tummies that go in and not out, the bare middles are here.  Cagey ones with a rib-basket the size of a hamper----forget it!  But those with a delicate curve----you're in, or you're off, for when you get down to it (and you can't get down any further), these are the shiny, sugary teasers----the clothes with the non-existent centres." 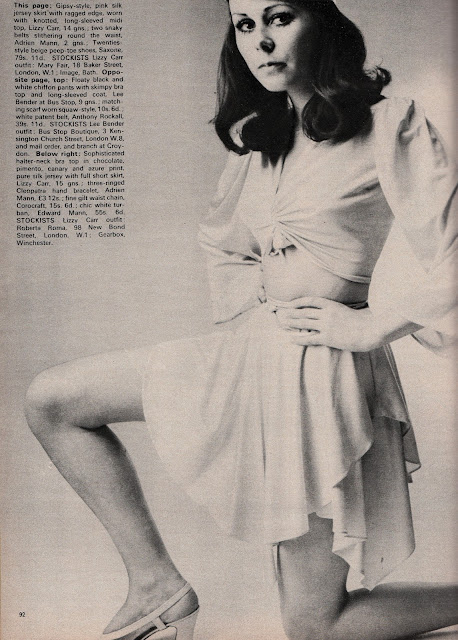 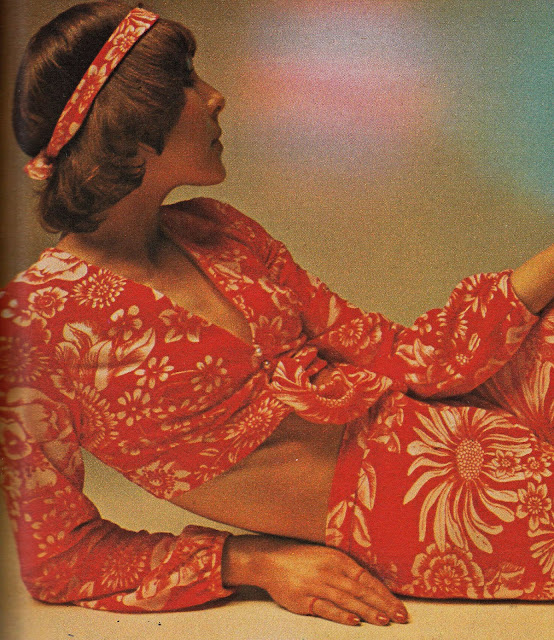 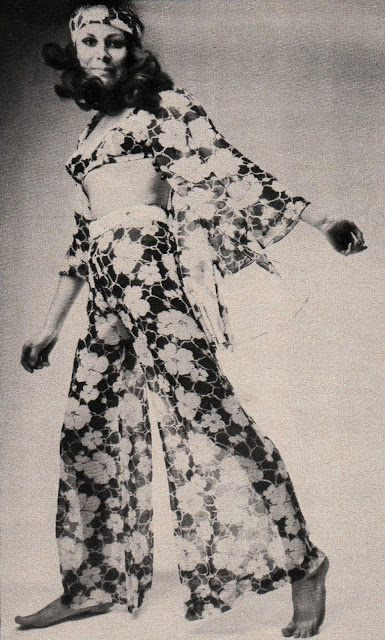 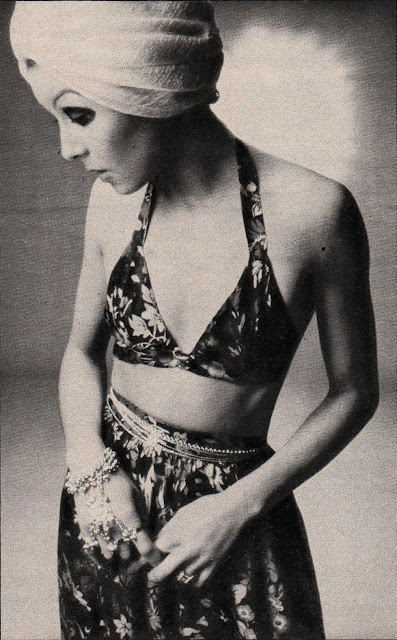 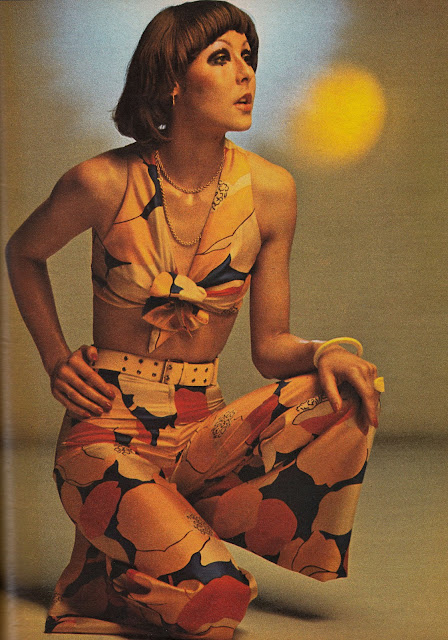 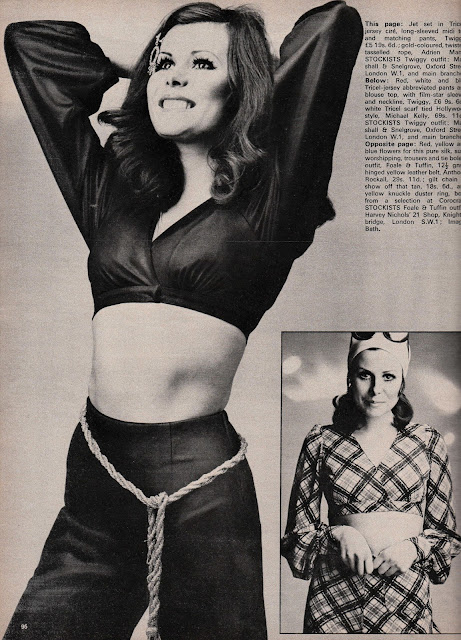 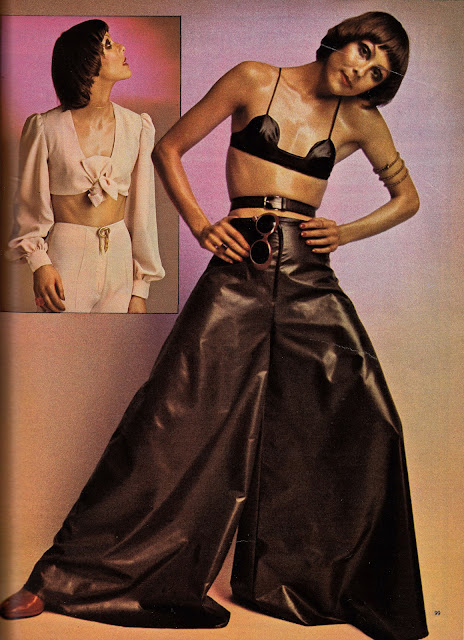 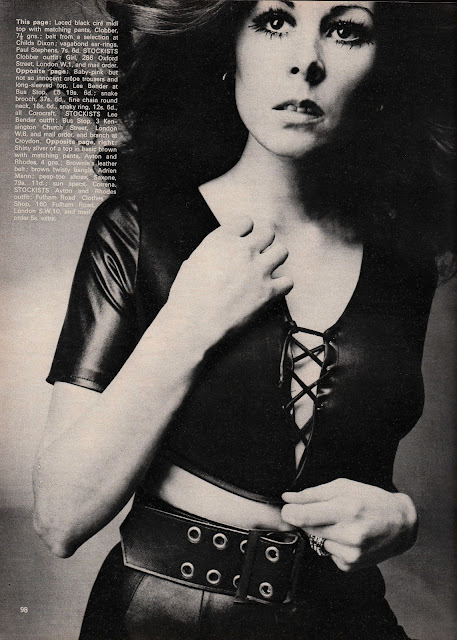 Photographed by: John Lawlor
Posted by Featherstone Vintage at 13:41 No comments: 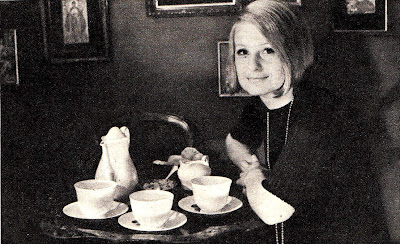 "Barbara Hulanicki.  Her brainchild Biba has grown from a mail-order gingham shift and scarf to a seven-floor Kensington department store in 9 years."

At a time when many department stores are attempting to break themselves up into individual boutiques, Biba (one of the original London pace-setting boutiques) is busy spreading itself into a full-scale department store.  On Monday the Thirties-style shop in Kensington High Street crosses the road to take up residence in a completely refurbished Derry & Toms.
It is the final stage in an extraordinary success story.  Ex-fashion artist Barbara Hulanicki (she trained at Brighton Art School) went into business in 1964 with a mail-order offer of a gingham shift and a scarf for £1 5s.  A year later she and her husband, Stephen Fitz-Simon, opened their first Kensington shop on the premises of an old Victorian drug store.  The idea was to produce cheap but well-designed clothes for the young market; the demand for them proved so great that, the following year, in larger premises in Kensington Church Street, Biba started to produce matching accessories.  In 1969 the Fitz-Simons acquired their present Kensington store where, in an atmosphere of carefully recreated Thirties nostalgia, up-to-the-minute customers in their teens and twenties jostle each other in their eagerness to buy Biba clothes, make-up and home furnishings.
"We are providing something of the glamour and glitter from a former era, but at down-to-earth prices," says Stephen Fitz-Simon, who work along-side his wife as as advisor and business manager.  "That is really what makes us successful."
Now Biba is on the move again, and if, to an outsider, it appears much more of a gamble this time, to blonde Barbara Hulanicki who still designs and co-ordinates all Biba's clothes, accessories and make-up, and chooses their original, often sombre colours, it is something she has wanted for over seven years.
"It's a natural progression really," says Stephen Fitz-Simon.  "Even if we get the same number of customers as we do now - about 100,000 a week - it will still be worthwhile.  At the moment half of them walk out with-out buying anything because they can't get near the counter."
The new seven-floor Biba super-store contains 120,000 square feet of selling space (compared with a former 9,000 square feet), and though the sombre colours and Thirties-style decor have been re-created, making it instantly recognizable to Biba devotees, the range and scope of merchandise have been greatly extended.
The dimly lit brown and black counters on the ground floor, fronted in peach and white mosaic mirror, offer new lines in leather goods, stationery, luggage and trinkets from the East.  One of the six remaining floors is devoted to a wide range of men's wear, including a sports department, while another floor offers an enormous selection of household goods, with a colour consultant on hand to offer free advice to those in need of help.  Barbara Hulanicki, tall, elegant and herself a mother of five-year-old son, has expanded her designing talent to include maternity wear and unconventional baby outfits, and these, together with toys, children's clothes, furniture and accessories, occupy the children's floor.  The most surprising departure of all, however, is the food hall, which carries a comprehensive selection of Biba name products including wines and spirits, as well as a variety of take-away foods prepared by Indian, Chinese, Armenian and Russian specialty restaurants.
But it's most imaginative thinking behind the store rather than the goods on sale that makes Biba different from anything else in London; still aimed at a young but affluent market, it is clearly intended to be a place where people can relax while they shop.  With this end in view, darts and indoor bowl are provided in the men's department, for use be either bored male shopping companions or undecided customers, while harassed mothers can leave their children in a special play area surrounded by wire mesh to prevent the more adventurous from going astray.  The children's floor itself is dominated by a fairy-tale castle and moat inside which books and records are displayed.  And on Saturdays someone will be there to tell stories and keep the youngsters amused, again leaving mothers free to go shopping in peace.
The display settings throughout the store are both original and amusing.  There is a "girlfriends room" in the men's department, made to look like a lush, pink, Hollywood-style bedroom complete with mammoth bed.  Here adoring husbands and lovers can select romantic nightdress, sexy underwear and slinky evening gowns - for those girls who still wear them.  At the other end of the scale, Snoopy fans can choose their favourite T-shirts from a walk-in kennel complete with Snoopy spread out across the top.  The maternity section is furnished on a larger-than-life size scale, intended to make expectant mothers feel that they have shrunk, like Alice in Wonderland, to minuscule proportions, and the household department is laid out to a series of cosy, frequently changing room settings.
Imagination even invades the bright yellow food hall in the basement, where fish is displayed on a sailing boat, milk and eggs are sold from an old-fashioned barn, and bread(freshly baked) is kept in a giant bread basket.  Dogfood is offered for sale by an enormous great dane (modeled on Barbara's own dog, Othello) and fresh meat can be purchased from an old-style butcher's shop.
Customers in need of immediate sustenance can make their way to the famous 720-seater Rainbow Room restaurant, preserved intact by the store's new occupants.  It will function quite separately from the store, remaining open until two a.m. every night in hope of attracting post-theatre crowds away from the West end.  The famous roof garden of Derry and Toms is to be maintained, but it will be opened later, probably next spring.
The whole operation has clearly cost and impressive amount of money.  Stephen Fitz-Simon is unperturbed by suggestions that it may turn out to be an expensive mistake.  "I was told nine years ago that we wouldn't be here in five years' time, so I'll take a chance on still being here in another ten."

Posted by Featherstone Vintage at 11:00 No comments: